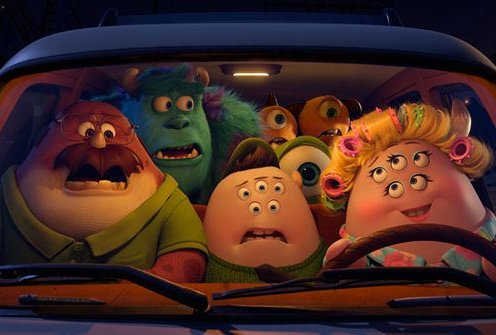 Monsters University opened in theaters this past Friday, and those who are Pixar fanatics know that they needed to keep a close eye out for Easter eggs.

Every Pixar film has a slew of Easter eggs – from ones that appear in nearly ever Pixar movie (A113, the Luxor Ball, the Pizza Planet truck) to ones that are more rare like a character from A Bug’s Life appearing in a Toy Story movie.

Monsters University’s Easter eggs are just as clever, hidden, and a joy to catch. Below are the ones we’ve found.

– A113: You’ll see the infamous classroom number on Professor Love’s lecture hall door when Sulley first enters. A113 is a reference to a classroom at CalArts where Pixar’s Chief Creative Executive Officer John Lasseter and director Brad Bird went to school.

– John Ratzenberg: The actor’s voice appears in every Pixar movie. In both Monsters, Inc. and Monsters University he plays the Abominable Snowman. In University, he’s referred to as The Snowman (presumably because this is before the public perceived him as being “abominable”).

– After credits scene: If you stick around after Monsters University‘s credits, you’ll see a bonus scene.

Last year Pixar released high-res photos from Brave showing off a few of the Easter eggs (like the one pictured above). We hope they’ll do the same this year after a couple more weeks pass.

Have you found a Monsters University Easter egg that we didn’t list above? Hit the comments to share!

I have to present an original cartoon character for my theatre class, memorize a monologue, and perform it in the cartoon's voice. My voice is comparable to that of Boo from Monster's Inc. except I say real words. What would be a funny monologue idea for her character? IT HAS TO BE MADE UP BY ME NOT AN...

@✨❤️mystery gun❤️✨: lying in the dark feeling way bad but I've got the musical songs from monsters inc in my head so that's something I guess Wed, 14 October 2015 10:26 PM