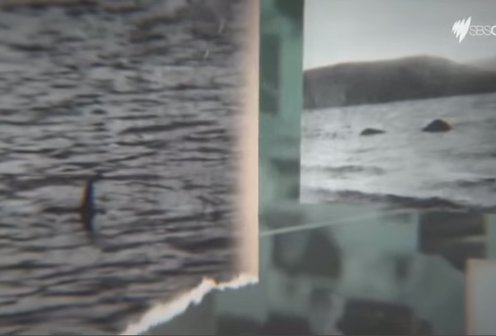 An old video from perhaps the late 1990s has been posted on LiveLeaks and I am not sure of its title or provenance but it is an enjoyable watch as old footage from years of reports and searches are shown. The documentary is sceptical and ends with the Sturgeon theory, which I guess is a monster of sorts (a subject worthy of a future post no doubt). Look out for Lachlan Stuart being interviewed at about 9m40s into the video (picture above). Quite topical considering the current posts on his photo and personalises the story a bit. You will also find the ubiquitous Alex Campbell, Tim Dinsdale and others featuring to varying degrees.

Another YouTube clip I saw is from a series of videos called "Mysterious Planet" whose 21st episode concentrates on the Loch Ness Monster. Now this clip has interest for me personally as they give time to the "eel head" interpretation of the photo that was first publicised on this blog. Based on that, the editor proposes the Giant Salamander theory which seems to have gained some traction recently (I suspect the editor had read this post I previously publicised).

How does the existence of the loch ness monster disprove evolution? | Yahoo Answers

It doesn't. There have been living fossils found before (e.g. coelacanth) and their existence is simply incorporated into the theory.
It does raise a significant question - assuming that it's a dinosaur, which is the most common hypothesis. How does a species continue virtually unchanged for 65 million years if the changes for evolution are occurring in other species constantly? But this problem is already well known within the theory of evolution. There are many examples of species which exist today in almost identical form to how they were fossilized millions of years ago.

@Shamela Hanley: I've resorted to watching a documentary on tv about finding the Loch Ness monster.. This is why I shouldn't be allowed days off Fri, 9 October 2015 10:14 AM